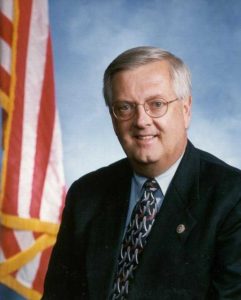 Curt Weldon was born on July 22, 1947 to Stephen and Catherine Weldon. He is the youngest of nine children. He was raised in Marcus Hook, Pennsylvania; a working class town situated on the Delaware River between Philadelphia, Pennsylvania and Claymont, Delaware. Curt attended public schools and attended Marcus Hook Baptist Church services with his devout mother.

In 1965, Curt joined the Viscose Fire Company as a volunteer, following in the steps of his father and brothers and eventually became Chief of the Company. Curt was the first in the family to graduate from college. He received his Bachelor of Arts degree from West Chester University in 1969 with a focus in Russian studies. Following his degree, he went on to teach in the William Penn School District and serve as a member of the Board of Directors of the Chester-Wallingford Chapter of the American National Red Cross. Curt continued his education taking classes at Cheyney University and in 1973, Curt received an Associate’s Degree in Fire Science Technology from Delaware County Community College. He became a certified State and County level Fire Instructor and was appointed as the first Administrator of the Delaware County Fire Academy in December of 1974.

In 1974, Curt took a professional leave from his teaching position to serve as an Environmental Specialist with Project KARE, a five-county environmental education federally funded program. Later, Curt served as the Director of Training and Manpower Development for INA, now CIGNA.

Curt married Mary Gallagher, a registered nurse from Wilmington, Delaware, in 1971. During the 1970s, their three daughters were born and two sons followed in the 1980s. They have four grandchildren.

He served as a Republican member of the United States House of Representatives from 1987 to 2007, representing the 7th district of Pennsylvania.