Pennsylvania Congressman Curt Weldon (1987-2007) today released his long-awaited book documenting the political empowerment of America’s 1 million Fire Fighters, EMS and First Responders. As a Firefighter, Fire Chief, PA State Fire Instructor and volunteer Training Director for one of the largest Counties in Pennsylvania, Weldon documents his life in the Fire Service and how he took the Firefighter’s battle to Washington, DC as a 20-year Member of the United States Congress.

In the book Weldon spins tales filled with tragedy and pain, emotion and passion, humor and good will intertwined with true stories from his own life as a Firefighter/Fire Chief in his hometown of Marcus Hook to the hallowed Halls of Congress where he confronted a governmental bureaucracy that had been unresponsive to the needs of career and volunteer First Responders in Pennsylvania and across America.

As the youngest of 9 born into a ‘blue collar’ family, Weldon was the first in his family able to attend college right out of high school. Like his father and 6 older brothers, Weldon followed in the family tradition and joined his local volunteer Fire Department (Viscose) where he would rise to become President and Chief of one of two Fire Departments in the most heavily industrialized community per capita in the nation.

As an educator by profession, Weldon taught in the public schools of Pennsylvania and pursued his PA State Fire Instructors Certification at Lewistown during the summer of the big flood in 1972. Weldon organized and served as the first Administrator (volunteer) of the Delaware County Fire Academy along with Tom Savage and IAFF Leader Harry Lott of Upper Darby. 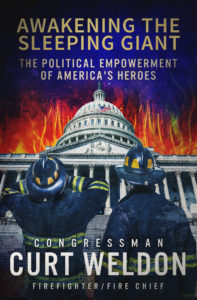 As Assistant Chief of Viscose Fire Department in 1975, Weldon documents the turmoil and tragedy of the largest incident in America that year handled by Marcus Hook FD and Viscose FD and volunteers from 80 fire and ambulance companies. Except for the Phila Fire Boats, all ground and dockside operations were handled by volunteers for 3 days.

Weldon was lead author of the 60-page technical book “The Corinthos Disaster” documenting details of the explosions and fires that killed 29 people and burned out of control for 3 days. He testified as an Expert Witness in Federal Court as well as US and PA House of Representative Hearings.

Like many local Fire Departments not given proper recognition and support, the book outlines how leaders from the two Fire Departments in Marcus Hook took matters into their own hands, ran for office as Republicans and Democrats and took over the town’s government in 1977.

One month after his election and ascension to become Mayor of Marcus Hook (while still Fire Chief of Viscose FD) Weldon documents Sunoco’s overfilling of one of the 5 man-made Underground Storage Caverns 300’ below the surface forcing liquified gas into the basements of people’s homes, fires that destroyed 5 homes and his evacuation as Mayor of 60 families for several months while changes were made.

From Marcus Hook to Washington, DC, Weldon documents the vision,
creation and success of the Congressional Fire & EMS Caucus and Institute initiated almost 30 years ago.

From the fire in Speaker Jim Wright’s Office to the ‘Storming of the US Capitol’ led by hundreds of fire apparatus from PA, NJ, DE, VA, NY. CT, OH, IN and other states demanding a national inter-operable communication system, to the drafting and passage of the Fire Grant and Safer Programs without the support of the Clinton and Bush White Houses to enact and appropriate $8+ Billion for America’s firefighters -these stories are your stories.

The dramatic story of firefighters locating a young 19 year old Chester County student who had drowned in one of the Finger Lakes in New York 6 months after others had given up hope to bring him home for a proper burial to ease his family’s pain is detailed in the book. At the bottom of Owasko Lake 11
miles long and 1 mile wide – Nathan Swymer’s body was found and brought home to Pennsylvania.

Weldon’s Book provides full details into the 1993 and 2001 attacks on the World Trade Center as witnessed first-hand through his work with FDNY Commissioner Howard Safir and Chief Ray Downey. The reader will feel the emotion and frustration from Weldon as he documents mistakes made by our government that former FBI Director Louie Freeh in a 2005 WSJ Editorial stated may have allowed us to prevent 9/11 from every occurring.

In the most personal Chapter, Weldon details what he calls the ultimate political arson – his ‘take-down’ two weeks prior to his last election. For the first time publicly, Weldon details the unbelievable story of how – and why – Weldon had to be stopped from rising to become Chairman of the powerful Armed Services Committee where he would have enjoyed unlimited Subpoena Power. Investigations that Weldon was pursuing are outlined. The reader will not believe that such events can (and did) occur in the greatest nation on the earth.

Wrapping up the ‘Awakening of the Sleeping Giant’ Weldon outlines his vision for the future. The new International non-profit ‘One World for Life’ is designed to identify, unify and empower Firefighters and First Responders worldwide. Estimated to be more than 25 million, Weldon documents his plans to reach out and embolden the new organization and welcomes the participation and involvement of Firefighters and First Responders everywhere to empower the world’s true heroes.

The book will be available only on Amazon late August/early September prior to the 9/11 Anniversary.

ALL PROCEEDS FROM THE SALE OF THIS BOOK WILL GO TO FIRE SERVICE GROUPS, INCLUDING ONE WORLD FOR LIFE!

As a Firefighter and/or First Responder, you don’t want to miss this book. It tells your story through Curt’s eyes and experiences and will change the way people of America look at our common calling!